How To Build A Vert Ramp

VERTRAMPS The two photos contain diagrams and an outline for building yourself a solid halfpipe ramp for full-on vertical skating, which many swear is the ultimate proving ground for skaters of all time. The dimensions (24′ wide, 16′ of flat bottom, 9’6″ transition with 1’6″ of vertical wall) are commonly used for several reasons: they reflect the fact that plywood is widely available in 4×8′ sheets, and 2×4 and 2×6 studs are usually bought in 8′ and 16′ lengths. Using lumber with these standard dimensions will add up to a nice 24-footer without wasting cut-off ends and creating a lot of useless scraps. If you lack funds or material, you can always cut back on your needs by building a smaller ramp, or by making the whole thing portable so you don’t need a foundation. Just remember: cheap is cheap. So, if you’ve got the money and the materials, build it big and strong without cutting corners. It will pay off in the long run. 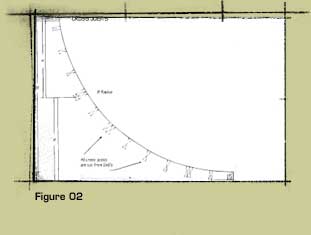 FOUNDATION Once you find a site to build on, it is important to make sure it is close to level. A level bottom framework makes everything else fall into place easier. If you are building on an incline, dirt, or uneven ground, you might want to elevate your frame on posts. To do this, sink 4×4 redwood or pressure treated posts at least two feet into the ground and leave them sticking up high enough at the low end to run a level horizontal beam between them. If you want to build a super-sturdy foundation, lay the bottom framework on top of posts sunk in wider post-holes that are filled with cement (see page 10, figure 1). Posting also lifts the structure off the ground, thereby keeping rot and insect damage in check for a longer period. Besides protecting your ramp, it is required in some areas that permanent wooden structures be raised above the ground. If you are building on hard, flat ground, cement, or asphalt, an easier, cheaper and less permanent way to build your foundation is to lay your 2×4 framework on the ground and level with shims of scrap plywood. Whichever of these three bottom framework variations you have, be sure to thoroughly check it with a level before you continue; a slight tilt at this point can easily screw things up in the end. This part of the ramp will be mostly covered up, so make sure that it is solid before you move on to the next step. Use 2×6 beams and joists. Lay these in a rectangular box the size of the ramp. In our case it would be 16′ of flatbottom plus two 9’6″ radius transitions and two 4′ rollout decks. Your framework will be 43′ long and 24′ wide. Brace this structure with 2×4’s spaced 12″ apart (on center; see glossary) under the flat section. Traditional let-in bracing should be used here; ask a carpenter how it should be done. Place the 2×4 joists in the frame with the 2″ side facing up and sitting flush with the top of the 2×4 beams. Secure the joists with two 16dd nails in each end, or two equivalently-sized screws whichever you prefer. The joists will act as a solid base for connecting the plywood to the flatbottom section.

Thanxs for the info Thrasher

Most people in the United States can tell the difference between a classic 1957 Chevrolet Bellaire sedan, and a 1974 ford citation. Sure they are both used cars over 25 years old. However you don’t need to be a collector to tell that the differences in these two vehicles go way beyond the original factory listings. One is a classic vehicle, much like a vintage wine, it gains value as time goes by, while the other is not much more than it’s name, a citation. Some pieces from the past gain value and respect as time ticks by, while others take up space. Retailers know this, and for this reason second hand shops have opened in the United States giving the consumer the opportunity to purchase anything from classic vehicles to antique furniture, eclectic jewelry to vintage clothing. Because of the style and quality of selected older pieces, some feel that the best pieces today came from the past. The apparel industry is no different. Fashion designers are continuously taking designs and cuts from the past, redoing them today and calling them vintage or retro inspired.

Different from the automobile industry, which has drastic changes and economic improvements from the 1957 Chevrolet Bellaire sedan, to the 2000 Camero; a pair of 1957 501 Levi jeans looks identical to a 2000 501 Levi jeans. The only difference being one is a classic with years of wear and tear that add to the comfort and durability of the jean, while the other is bran new awaiting the years that will one day separate it making it unique from that of it’s new counterpart. For this reason retailers have filled the gap for the consumer and vintage clothing stores can now be found in nearly every major city in the US. From the old streets of San Francisco to the over populated streets of Manhattan, every city now has a plethora of its vintage shops. These are not to be mistaken as thrift stores, such as good will or Salvation Army. Vintage Clothing Stores instead carry pieces that are classic and desired for whatever reason it may be, and offer it to the consumer along with a section of similar pieces from the same period.

This is not the first time we have heard about this, and probably will not be the last. We thought you had the right to know.

Urban Outfitters ripped off a Johnny Cupcakes shirt and is now selling it in some of their stores.

Here is the story. Urban Outfitters have just released a shirt with a jet dropping cupcakes (with a different color scheme) which is the exact same thing that Johnny Cupcakes released around 2 years prior.

Last year Urban wanted to carry my shirts; they had a few Johnny Cupcakes shirt samples I had sent them….the Jet dropping cupcakes being one of them. I never ended up getting my samples back after we decided not to do business together.

A note From Johnny Himself:

THEY NEVER HAD PERMISSION TO REPRODUCE THIS OR ANY OTHER OF MY DESIGNS.

A friend of mine that works in an Urban Outfitters e-mailed me recently, telling me that she thought they got Johnny Cupcakes shirts in…. except they had an “Urban Renewal” tag/print on the inside of em – which is Urban Outfitters’ notorious clothing line that rips off small, independent artists & designers from all around the world. I know over a dozen people that work at different Urban Outfitters across the US, and they’ve told me this happens all the time. Most of them are ashamed to work there, but it beats McDonald’s.

I am currently talking to a few lawyers to see if there’s anything I can do. They may have changed the design around enough so that they can’t get in trouble. Major bummer.

If you google “Urban Outfitters” and “Infringement” – you will find over five hundred results & cases about Urban Outfitters infringing upon young/small designers & clothing lines. I’ve been getting tons of e-mails from designers that couldn’t even take their cases to court, because they’re not a billion dollar corporation (yet) & don’t have a fraction of the money that Urban brings in.

I am Johnny Cupcakes, this company is my life, and this awful, scummy situation upsets me.

Above you will see the Red Jet t-shirt dropping cupcakes that I originally sent to them, as a sample, before I decided to keep my shirts out of Urban Outfitters. They KEPT my sample shirts, copied the idea of one of them so far, and is now mass producing them with their ‘Urban Renewal’ company name on the inside .

HOW CAN YOU HELP?

-Re-post this & these links on websites.

-E-mail this to anyone & everyone you know.

-Support more independent shops & boutiques, rather than feeding your dollars
to a company that is fine with cheating real companies.

-Please let me know me if you come across any other Johnny Cupcake-ish designs
in the Urban Outfitters stores.

-And you can purchase the real deal — Johnny Cupcakes shirts here .

Thank you so much for your time!