For The Wine Lovers 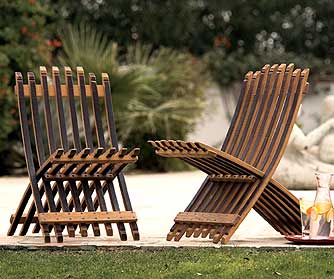 These nifty chairs were created by hand from genuine white oak recycled wine barrels, each chair is branded with the wineryâ€™s original name. Not only do these comfy chairs work well inside or out, but they only get better with age. I have heard of that before? 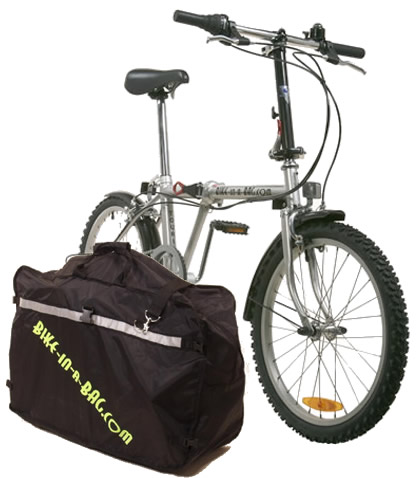 The struggle to preserve public access to the beach is spreading across the nation from California to Connecticut and from Florida to the Great Lakes. California’s beaches belong to all the people. The wealthy rich prick beachfront enclave of Malibu and media mogul David Geffen nevertheless filed suit to cut off the people’sright to reach the beach. A Newport Beach city councilmember opposes improvements to a public beach because “with grass we usually get Mexicans coming in there early in the morning and they claim it as theirs and it becomes their personal, private grounds all day.” People of color and low-income people suffer first and worst from the efforts to privatize public beaches. While eighty percent of the 34 million people of California live within an hour of the coast, disproportionately White and wealthy homeowners stand to benefit from the privatization of this public good, while communities of color and low-income communities are disproportionately denied the benefit of coastal access.

Beaches are not a luxury. Beaches are a public space that provide a different set of rhythms to renew public life. Beaches are a democratic commons that bring people together as equals. People swim and splash in the waves, “people watch,” surf, wile away the afternoon under an umbrella, scamper between tide pools, or gaze off into the sunset. Public access to the beach is integral to democracy and equality. Rio de Janeiro, like Los Angeles, is marked by some of the greatest disparities between wealth and poverty in the world. Yet Rio’s famous beaches are open to all, rich and poor, Black and White. The beach in Rio is the great equalizer. California’s world famous beaches must also remain public for all, not the exclusive province of the rich and famous. The Connecticut Supreme Court has recognized the First Amendment right of non-residents to use a public beach against efforts by the city of Greenwhich to restrict access to its residents. A New Jersey appellate court has recognized the right of public access to reach the beach at a private club under the public trust doctrine. A Michigan court, however, has recently limited public access to the beach along Lake Michigan. In Florida, 60% of the “public” beaches are now “private.”

In order to make a difference before it gets to late The center For the law and Public Justice along with the Surfrider foundation have put together a “Free the Beach” campaign. For more information go to http://www.surfrider.org/media5.asp

Is Being Green Becoming Too Trendy? That is the question that is posed by Slate Magazine. You really can’t miss it. Being green is the new catch phrase now a days. Celebrities, Politicians, and Urbanites have all jumped on the bandwagon. So are we just doing it for kicks or do we truly care about the Environment? I admit I am a casual environmentalist. I have been blessed enough to have started and now run a couple of different business in the past decade that that teach people how to recycle, refurbish, and retail old clothing back into the mainstream. I am not about to go join GreenPeace, in fact, they kind of give me the creeps. When I used to live in a real city, whenever one tried to approach me, I would actually start running to the other side of the street dodging ambitious cab drivers and cyclists who were probably biking to reduce Carbon Emission. Don’t get me wrong, I am all for the environment, but I didn’t need some college kid with nothing to do during breaks do a sales pitch on me in the middle of the streets of San Diego.

So back to the article… this is what Slate said, “Yellow journalism now comes in a new color: green. Often as sensationalistic as its yellow predecessor, green journalism tends to appeal to our emotions, exploit our fears, and pander to our vanity. It places a political agenda in front of the quest for journalistic truth and in its most demagogic forms tolerates no criticism, branding all who question it as enemies of the people.”

It seams that after Al Gore’s movie came out that everyone wan’t to be part of the fad. Corporations are jumping on the band wagon, and changing the terminology in their marketing campaigns making them seem green or sustainable. Take for example, Live Earth, that was on a couple of weeks ago. It was a nice touch, but did it help the environment. How many emissions were used for people to travel to the events. How much coal was burned so we could use the electricity to watch it on TV. These are just a couple of questions that were hidden behind the corporate sponsored commercials and ads that went on to put on such an event. It seemed a bit odd.. Here you are having all these advert to consume more and more.. And then commercials about consuming less, Identity crisis for sure.

Then back to the article.. Slate questions the validity of Carbon Off-putting programs and companies that are all of sudden going green Equally skeptical of the carbon credits has been the Financial Times. Companies and individuals rushing to go green have been spending millions on carbon credits projects that yield few if any environmental benefits, Another brilliant FT piece cites several academic studies to show that imported foodstuffs are not necessarily the carbon bombs that calvores make them out to be. The piece speculates that the car ride back from the grocery store might be the most carbon-intensive part of a fruit, vegetable, or leg of lambss journey from farm to pantry.

So what do we do now.. should we just say “CHEESE SH*T and give up? No, I don’t think that’s the answer either. Perhaps it is a marketing gimmick to get people to buy more products meanwhile doing nothing for the Environment. Maybe this is a whole big conspiracy to make people want to do for the environment but actually harming it instead.

I can go on an on, but the truth is it starts with the individual not the corporation. Corporations like religious organizations will give you the false hope that everything is all right, as long as you don’t doubt or question what they tell you. Because of this it has to start in the home. You as a consumer can make some decisions to lessen the impact that doesn’t cost any money.. or little money. You do not have to buy a compost that costs couple hundred dollars. Certain things make sense.. like Recycling. It does not cost you a dime but it is effective ¦ Recycling is Indeed Better. Turning off the lights you do not use.. makes sense 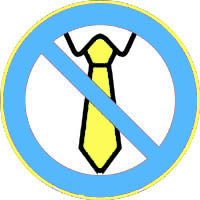 Sometimes its easy to make a simple change that could make a huge difference, almost too easy. The Italian government has made an official request that businesses loosen up on the dress code during hot summer months. A statement from the ministry claims that, “Taking your tie off immediately lowers the body temperature by 2 to 3 degrees Celsius. Allowing a more sensible use of air conditioning that yields electricity savings and protects the environment.

While this may not seem a significant message outside of Italy, by relating dress style to global warming the Italian government may have found a way to get the attention of a blas public. One of the European Union’s most polluted members, Italy, in spite of various efforts to reduce emissions, is expected to exceed greenhouse gas emission targets. Perhaps by encouraging shabby dress in the workplace the government has tapped a nerve that will lead to other, more significant changes.

At least one tie-maker on the other hand is not impressed with the government’s anti-tie message. Reuters quotes from a letter to the newspaper Il Sole 24 Ore: “Italy confirms that it is a strange country,” said Flavio Cima “I, tie maker, am responsible for global warming. We can now happily continue with our lifestyle, using cars, consuming fuel, heating and cooling our homes at leisure. On one condition: we should not wear a tie while we do so.” Via ::Yahoo News