The Transportation Corridor Agency is seeking to build an extension to the existing 241 Toll Road. The proposed Foothill Transportation Corridor South (FTC-South) is a sixteen-mile long toll road highway that would connect the current terminus of the 241 Toll Road to Interstate 5. The TCA is proposing six alignments for this project; four of which run directly through and along San Mateo Creek. If constructed, not only would this project directly threaten the world class surf break at and around Trestles (including Uppers, Lowers, Middles, Church and Cottons), the project would also result in the obliteration of Southern California?s last remaining pristine coastal watershed and substantially degrade habitat that is critical for the survival of at least seven endangered species, including the Southern Steelhead trout. 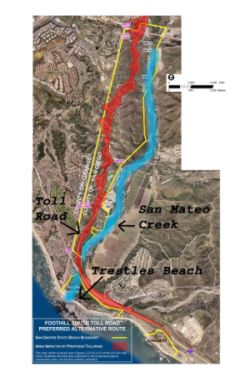 * This project would require substantial grading of the terrain and millions of yards of hard reinforcement (steel, concrete and other materials), that will alter the natural sediment flow through San Mateo Creek,, which supplies sand to the Trestles surf breaks.

* According to the Transportation Corridor Agency?s own engineering consultants, losses in sedimentation flow would cause ?substantial degradation to surfing resources,? which will likely result in significant degradation to the wave quality at Lower Trestles and nearby breaks (including Uppers, Middles, Cottons and Church).

* A recent scientific report demonstrates that when over 10 percent of a watershed is paved there are significant water quality and ecosystem impacts.

* Similar projects have resulted in generating significant increases of oils, heavy metals and other toxins. Given the proximity of the project to the watershed, this project would result in a decrease of water quality for Trestles and the surrounding breaks.

* The TCA?s assertion that they can mitigate for this run-off is dubious. The initial mitigation systems that were installed on the nearby RT73 Toll Road failed, and had to be replaced at tax-payer expense. All mitigation efforts are ineffective during large rain events.

Environmental Damage from the Toll Road

* The walk in at Trestles is half the experience. The area is home to numerous native plant and animal species, including several endangered species. This area would be profoundly impacted by such a massive project essentially cutting the San Mateo Creek watershed in half.

* The FTC-South will run directly through San Onofre Beach State Park. This 2028 acre park the 5th most visited park in the California State Parks system.

* The San Mateo Creek Watershed is one of the last large coastal open spaces in Southern California The FTC-South will forever change this last vestige of coastal wilderness, including profound compromises to the Donna O?Neill Land Conservancy. 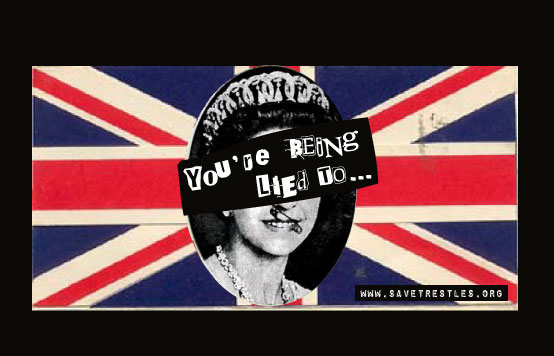 THE PROJECT DOESN?T MAKE SENSE TO BEGIN WITH…

It Provides No Traffic Relief

* TCA claims that the FTC-South will provide relief of traffic congestion along Interstate 5 in fact contradict their own FTC-South traffic projections that rely on cannibalizing San Diego County bound traffic from the I-15 and feeding that Inland Empire traffic to the I-5 via the toll roads.

* FTC-South would be built through undeveloped land, which would promote development, and ultimately bring forth new traffic from urbanization.

* FTC-South will increase, not decrease traffic on the 1-5 stretch in south San Clemente where the proposed toll road will merge with 1-5, which is already at over-capacity along this stretch. Northern San Diego County will also be affected by potentially severe increases in traffic congestion.

* The FTC-South is expected to cost close to $1 billion (nearly $53 million a mile). Currently the plan is to fund the project by non-recourse bonds, as well as development impact fees that are already being added to real estate sales in Southern Orange County.

*Contrary to TCA claims, these projects are NOT SELF FUNDED! According to an October 10, 2005 article in the Orange County Register, the nearby RT73 Toll Road is ?financially struggling? and ?faces not being able to make its debt payments in about nine years.?

SUPPORT THE SURFRIDER FOUNDATION IN ITS FIGHT TO SAVE TRESTLES!

* The dramatic decreases in water quality, degradation to the wave quality at Trestles, destruction of the San Onofre State Beach Park and some of the last open space in Southern California, and harm to endangered and threatened species
are costs not worth the questionable benefits of this extremely expensive toll road.

* Surfers, swimmers and other ocean enthusiasts enjoy the waters and waves of Trestles year round. There is no other place like it in California or the world. Please join in our efforts to Save Trestles for our children and future generations.